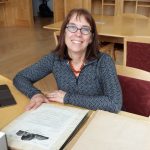 It’s been over a month ago now but I wanted to share some reflections on an interdisciplinary, interdepartmental talk that was organized by graduate students in the College of Forestry and in School of History, Philosophy, and Religion here at OSU. In Jacob Hamblin’s Environmental History seminar last year, I (Tamara Caulkins, PhD candidate, History of Science) had the good fortune to meet forestry PhD candidate Jesse Engebretson. He became involved in a new OSU student group called “Diverse Perspectives in Forestry Group” under the dynamic leadership of Randi Shaw, and a new lecture series was born.

This series aims to bring to the table underrepresented views to the practice of Forestry. Bowcutt’s talk was part of this series which was also sponsored by The OSU College of Liberal Arts “Environmental Arts and Humanities Initiative,” under the direction of Prof. Jacob Hamblin.

Our speaker, Frederica Bowcutt, botanist and author of The Tanoak Tree: An Environmental History of a Pacific Coast Hardwood, gave a well-attended lecture in Richardson Hall on May 20, 2016 at noon. Professor Bowcutt spoke about the many ways the tanoak has figured in the history of southwest Oregon and northern California from the use of its acorns by Amerindian tribes for food to the tanning of leather for saddles by sixteenth century Spanish colonists to a complicated role in twentieth century logging. As a historian of science, I get very excited about how what goes in to the making of knowledge – or “scientia” as science was called in the early modern period that I study – so I was thrilled with Dr. Bowcutt’s use of a wide variety of primary sources such as a medieval book of hours that pointed to the European disdain for acorns as a food source even before they encountered Amerindians (these early miniatures showed that only pigs or cavemen ate acorns) or a mid-twentieth century poster advocating mechanical processing of timber that read “you don’t have to pay the man who isn’t there.”

She has also worked as an environmental consultant doing rare plant surveys and ecological restoration. Since 1996, Dr. Bowcutt has taught botany in interdisciplinary programs at The Evergreen State College in Olympia, WA. She specializes in floristics, field plant ecology, and plant-centric environmental history. A sample of some of the classes she has taught will give you a sense of the wide range of her interests: Plants, Fungi, and People, European Ethnobotany and Art, and Field Plant Taxonomy and Conservation. Students in Dr. Bowcutt’s course “Picturing Plants” designed and constructed numerous signs across the Evergreen campus, providing historical and taxonomic information on local plants.

Bowcutt is an extraordinary scholar not only for the rigor of her scientific work but for the way she has honored the knowledge of indigenous peoples, loggers, citizen scientists, wood-working craftsmen, and wood products manufacturers. These diverse perspectives are woven throughout her talk on the many aspects of the tanoak tree – considered in different periods as a “beautiful” tree, a “weed” and “trash tree” which audience members more deeply appreciated by the end of her talk. Climate change has affected this tree through increasingly erratic weather which favors the spread of the pathogen P. ramorum. Although the tanoak is not as commercially valuable as other species such as Douglas-fir, the spread of the disease does affect the forest ecosystem more generally. Bringing out these complicated connections is a primary goal of the “Diverse Perspectives in Forestry Group” and offers an excellent example of how schools of science and of humanities collaborating across the OSU campus can enrich our understanding. Bowcutt’s penetrating analysis of timber practices and their consequences for ecological systems in southern Oregon and northern California sparked a lively discussion after the talk.

Bowcutt published her book on the tanoak in 2015 with the University of Washington Press. She has also published multiple floras on state parks in the North Coast Range and Central Valley of California. Her essays have appeared in a variety of journals including Environmental History and Human Ecology  as well as an anthology compiled by Carolyn Merchant entitled Green Versus Gold: Sources in California’s Environmental History. She has taught for over twenty years at Evergreen State College addressing such topics as the interactions between plants and people, European Ethnobotany and Art, and Field Plant Taxonomy and Conservation.

The “Diverse Perspectives in Forestry Group” will be continuing their speaker series. Stay tuned!

Oceanographers and the Cold War