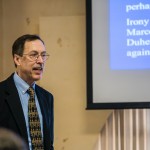 On 16 January 2015, the Oregon State University School of History, Philosophy, and Religion celebrated the career of the historian of science, Horning Professor Emerita Mary Jo Nye, in a conference organized by current Horning Professor Anita Guerrini. The following blog, composed by graduate students in OSU’s Program in the History of Science, Technology, and Medicine, recounts this celebration of a life in scholarship.

In a talk entitled The Indifferent Hypothesis Redux: The Dilemmas of Pierre Duhem, Dr. Alan Rocke explored the philosophy of Pierre Duhem, a late 19th century physical chemist. He emphasized how politics and personal enmity had an impact on theories accepted and promoted by scientists. Dr. Rocke argued that historical, biographical and psychological details play crucial roles in the construction of scientific philosophy.

Duhem opposed atomistic ideas in chemistry on philosophical and personal grounds. Another key opponent of the atomism in chemistry was a contemporary of Duhem, Marcellin Berthelot. Although in the same scientific camp, Duhem did not support Berthelot’s views. In fact, he opposed him due to personal animosities. On the other hand, Duhem favored one of the key proponents of the Atomistic theory at the time, Charles-Adolphe Wurtz. Although they did not agree on scientific grounds, their similar religious affiliations made Duhem an ardent follower of Wurtz. Ironically, he used some of Wurtz’s arguments in support of atomism to oppose atomism in his own papers. Wurtz’s articulation that science can never be satisfied with the fecundity of atomism in the face of the unique and universal first cause, ‘God’, was used by Duhem as an inspiration to his objection to atomism.

In analyzing the strengths and weaknesses of Duhem’s arguments, Dr. Rocke pointed to the convergent realism inherent in Duhem’s statements and concluded the lecture with the lingering thought that Duhem’s history reflects a combination of boldness and epistemic caution the prevalent 19th century France.

In another of the day’s papers, Dr. Leandra Swanner, one of Profesor Nye’s former students, shared her research on the history of the astronomical observatories atop Mauna Kea. Dr. Swanner is now at Arizona State University and her research focuses on the interaction between astronomers and the local communities of environmentalists and others. Her case study for the conference showed how and investigated why some native Hawaiians fought against expansion of the telescope complex on Mauna Kea. Dr. Swanner contends that this discord has forced astronomers to come down off the mountain to “meet the public” and justify their science.

Telescopes on top of Mauna Kea date from the 1960s, when the site was identified as an optimal location for astronomical research on account of its elevation, lack of light pollution, and easy access for the American scientific community. In the 1960s, Federal environmental regulations were more lax than they are today, and the Environmental Protection Agency had yet to be created. The first telescopes on Mauna Kea were approved and constructed with a bare minimum of environmental considerations in mind. Moreover, the sacred nature of the mountain’s summit to practitioners of native Hawaiian religion was not then a decision-making factor in the project. The telescopes themselves were part of the modernist American scientific adventure, the islands were considered as a perfect location for telescopic explorations of the cosmos.

By the 1970s, however, environmentalists began to protest what they perceived to be a cavalier attitude towards Mauna Kea’s fragile mountain ecosystems. The 1980s saw a resurgence in Hawaiian culture and religious practices, a trend that encouraged native Hawaiians to assert the sacred nature of the mountain in contrast to its scientific value. Astronomers, whose science has tended not to inspire controversy, found themselves in the middle of a conflict over how to best use the land in order to search the skies. Dr. Swanner has shown that they have attempted to align modern astronomy with the traditional Hawaiian art of navigation. She also points to their use of educational outreach tools as a means to connect with local communities. These two strategies have met with mixed success. Dr. Swanner’s research is an interesting foray into the politics of science in the age of ecology. She shows that space matters and is worth contesting, for science, for culture, and for the earth.

Dr. Swanner examined how social pressures have changed the narratives of the research being done there over time, from descriptions of Mauna Kea as an “ideal location,” to the “Umbilical cord to the mysteries of the Universe.” Along the way, we gain insight to the complex issues facing the scientific community when their interests, even in the pursuit of pure science, trespass on the interests of others. Finally, I would suggest that this case serves as an example of the reliance of policy changes in research on long term studies with high confidence intervals that take years to develop. This is a strategy that has been described by Oreskes (Merchants of Doubt) and others as being used by corporate political entities to prevent regulatory measures from being passed concerning their activity. Here we see the same principal at work in a decidedly “left leaning” scientific community.

The astronomers were clearly shocked by the native assertions that the large telescopes (there are at least 12 now) are an extension of colonial domination of the island, symbolic of the rich white man’s lavish lifestyle and wanton disregard for the immediate environment. Their arguments amounts not only to an indictment of the negative aspects of this particular observatory (impeding the prayers of native religious practitioners via its presence, and destroying a rare local species) but also of astronomy writ large. Why, the natives and other protesters wonder, would someone spend so much time looking out at the stars when we can’t even take care of what we have here on earth?

In another one of the wonderful papers presented at the Mary Jo Nye Festschrift, Dr. Michael D. Gordin examined how science and philosophy developed in the career of Arnost Kolman. In drawing parallel lines between his ideas about Kolman and Mary Jo Nye’s book Michael Polanyi and His Generation: Origins of the Social Construction of Science, Gordin portrayed an East/West division in philosophical scholarship during the twentieth century, growing out of the central Hapsburg cities, such as Prague and Budapest.

Born in Prague in 1892, Arnost Kolman grew up in a politically and culturally engaged city. After being captured by the Tsarist forces during World War I, Kolman joined with the Bolsheviks, becoming a lifelong Marxist. This influenced his career, as well. While Michael Polanyi and others turned west to expand their careers, towards Britain and Germany, Kolman turned east, moving to Moscow. Due to his interest in mathematics, his university training, and political status as a Bolshevik, Kolman contributed to the history and philosophy of science in the Soviet Union. He also strongly adhered to the ideas of dialectical materialism in his work.

Kolman is perhaps most well known for appearing in the 1931 volume Science at the Cross Roads, next to Boris Hessen’s “Social and Economic Roots of Newton’s Principia.” Gordin argued that Kolman played a large role as a political representative at the 1931 conference. In addition, Kolman wrote extensively about cybernetics during the infamous Lysenko affair, which demonstrated the significance of Soviet cybernetics as compared with genetics. Lysenko, it seems, was fairly insignificant in the larger picture of the development of Soviet style philosophy of science.

Through examining Kolman, Dr. Gordin contended that the early Soviet Union thrived philosophically, as the confrontation of Marxism fostered a mutual creation of political philosophy and philosophy of science. Dr. Gordin also drew parallels between the exodus of scholars from former Hapsburg cities into the west and subsequent developments in philosophy, and Kolman’s exit into the East. These cities were important in fostering a generation of socially aware scholars interested in the philosophy of their fields. In doing so, Dr. Gordin encouraged scholars to think critically about the development of history of science.

All of the presentations will be compiled and edited into a special issue of Historical Studies in the Natural Sciences to honor Dr. Mary Jo Nye.
We wish to thank the Chemical Heritage Foundation for co-sponsoring this celebration and to Professor Mina Carson for the use of her photographs.

Oceanographers and the Cold War